I walked the fields of Fredericksburg, Chancellorsville, the Wilderness, and Spotsylvania many times while mapping the campaigns of the Eastern Theater of the Civil War. Studying the Civil War is my passion and to date, I wrote ten books because of it. The time that I devote to my studies of the Civil War, however; is limited by my “day” job as President of the College of Southern Maryland. This also restricts the time I can devote to nonprofit organizations. I felt compelled to make the time when the opportunity was presented to become a member of the Central Virginia Battlefields Trust (CVBT) Board.

During battlefield visits, I am dismayed by the destruction of these sacred sites. Standing at the location of the mill race, now Kenwood Avenue in Fredericksburg, it is impossible to see the ground the men in blue traversed to ultimately be slaughtered before Marye’s Heights. The town of Fredericksburg has changed over the years, as the ever growing population engulfed those sacred grounds. The same is true at the Wilderness battlefield, where a housing development around Grant Lake has sprung up on the ground that saw very heavy fighting during May 5 and 6, 1864. On May 5, Henry Heth’s Division’s left flank valiantly held off charge after charge of an overwhelming number of Union troops. Gen. Wadsworth’s division traversed this ground on its journey to crush the Confederate defensive line on the early morning of May 6 and was the scene of heavy fighting as Longstreet’s men appeared later that morning. Many other troops thrashed their way through the thickets here. However, access to these sacred grounds is barred because of the private residences that dot the landscape. 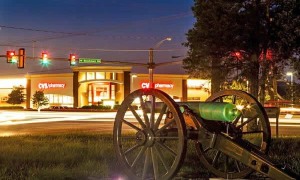 The heroic efforts of the Civil War Trust and the Gettysburg Foundation are celebrated for preserving historic sites. Less well-known is the CVBT, which concentrates its efforts in preserving the Fredericksburg-Chancellorsville- Wilderness- Spotsylvania battlefields. It is a big job as the population of Fredericksburg and its surrounding counties has increased 120 percent since 1970, four times the rate of growth of the rest of Virginia. The organization can count many successes over the years, including the preservation of over 1,000 acres of sacred land. They not only preserve the land itself but also act as advocates for battlefield preservation in general.

While the relationship between the Gettysburg Foundation and the rangers at the Gettysburg National Military Park are renowned and applauded, the relationship between the CVBT and the personnel at the Fredericksburg-Spotsylvania National Military Park complexes is equally strong. The synergy has helped strengthen both entities.

For me, writing a check is not enough. I need to give back to those men who made the ultimate sacrifice by contributing my time and knowledge. That’s one of the reasons I write books and why I have decided to join a committed band of individuals who have such a passion for our nation’s heritage. There is much more work to be done and it is my hope that more people will lend their support to this outstanding organization. Please take a moment to visit the CVBT website (http://www.cvbt.org).